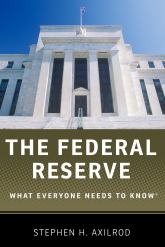 The Federal Reserve: What Everyone Needs to Know®

The Federal Reserve System--the central bank of the United States, better known as The Fed--has never been more controversial. Criticism has reached such levels that Congressman Ron Paul, contender for the Republican presidential nomination in 2012, published End the Fed, with blurbs from musician Arlo Guthrie and actor Vince Vaughn. And yet, amid a slow economy and partisan gridlock, the Fed has never been more important. Stephen H. Axilrod explains this influential agency-its powers, operations, how it sets policy-in The Federal Reserve, a timely addition to Oxford's acclaimed series What Everyone Needs to Know. Of the two major governmental tools for shaping the economy, Congress controls fiscal policy-taxation and spending-and the Fed makes monetary policy-influencing how much money circulates in the economy, and how quickly. Traditionally the Fed has relied on three instruments: open-market operations (buying and selling U.S. bonds), lending to banks, and setting reserve requirements on bank deposits. It also helps to regulate the financial system. Drawing on years of experience inside the Federal Reserve System, Axilrod shows how these tools actually work, and answers a series of increasingly detailed questions in the series format. He asks, for instance, if the system of regional Fed banks needs modification for today's technological landscape; if there is corruption in the Fed's governance; what happens to profits from its operations; the impact of political pressure; the extent of Congressional oversight; and just how independent it truly is. Whether discussing the Fed's balance sheet through the financial crisis of 2008 and beyond, the federal funds rate, or the international context, Axilrod displays a mastery of his subject Coming in time for the Fed's 100th anniversary in 2013, this book deftly explains an institution that every American needs to understand.