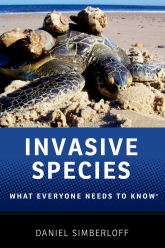 Invasive Species: What Everyone Needs to Know®

Invasive species come in all sizes, from plant pathogens like the chestnut blight in eastern North America, to the red imported fire ant that has spread throughout the South, the predatory Indian mongoose now found in the Caribbean and Hawaii, and the huge Burmese python populating the Florida swamps. And while many invasive species are safe and even beneficial, the more harmful varieties cost the world economy billions of dollars annually, devastate agriculture, spread painful and even lethal diseases, and otherwise diminish our quality of life in myriad surprising ways. In Invasive Species: What Everyone Needs to Know, award-winning biologist Daniel Simberloff offers a wide-ranging and informative survey that sheds light on virtually every aspect of these biological invaders. Filled with case studies of an astonishing array of invasive species, the book covers such topics as how humans introduce these species-sometimes inadvertently, but often deliberately-the areas that have suffered the most biological invasions, the methods we use to keep our borders safe, the policies we currently have in place to manage these species, and future prospects for controlling their spread. An eminent ecologist, Simberloff analyzes the direct and indirect impacts of invasive species on various ecosystems, such as when non-native species out-compete native species for food or light, describes how invasive species (such as the Asian mosquito that is a vector for West Nile virus, itself an invasive species) transmit pathogens, and explains his acclaimed theory of "invasional meltdown" in which two or more introduced species combine to produce a far more devastating impact than any one of them would have caused alone. The book also discusses the more controversial issues surrounding invasive species and it concludes with suggested readings and a list of related web sites.