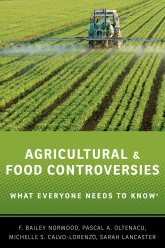 Agricultural and Food Controversies: What Everyone Needs to Know®

The public is more interested in agricultural and food issues than ever before, as is evident in the many agricultural controversies debated in the media. Why is it that some people embrace new agricultural technologies while others steadfastly defend traditional farming methods? Why do some prefer to buy food grown around the world while others patronize small, local farmers? In the debates about organic food, genetically modified organisms, and farm animal welfare, it is not always clear what the scientific literature actually says. To understand these controversies, the authors encourage readers to develop first an appreciation for why two equally intelligent and well-intentioned people can form radically different notions about food. Sometimes the disputes are scientific in nature, and sometimes they arise from conflicting ethical views. This book confronts the most controversial issues in agriculture by first explaining the principles of both sides of the debate, and then guiding readers through the scientific literature so that they may form their own educated opinions. Is food safe if the farm used pesticides, or are organic foods truly better for your health? Are chemical fertilizers sustainable, or are we producing cheap food today at the expense of future generations? What foods should we eat to have a smaller carbon footprint? Is genetically-modified food the key to global food security, and does it give corporations too much market power? Is the prevalence of corn throughout the food system the result of farm subsidies? Does buying local food stimulate the local economy? Why are so many farm animals raised indoors, and should antibiotics be given to livestock? These are the issues addressed in Agricultural and Food Controversies: What Everyone Needs to Know. While it doesn't claim to have all the answers, it provides a synthesis of research and popular opinions on both sides of these important issues, allowing readers to decide what they value and believe for themselves.