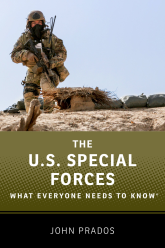 The US Special Forces: What Everyone Needs to Know®

The assassination of Osama bin Laden by SEAL Team 6 in May 2011 will certainly figure among the greatest achievements of US Special Forces. After nearly ten years of searching, they descended into his Pakistan compound in the middle of the night, killed him, and secreted the body back into Afghanistan. Interest in these forces had always been high, but it spiked to new levels following this success. There was a larger lesson here too. For serious jobs, the president invariably turns to the US Special Forces: the SEALs, Delta Force, the Green Berets, and the USAF’s Special Tactics squad. Given that secretive grab-and-snatch operations in remote locales characterize contemporary warfare as much as traditional firefights, the Special Forces now fill a central role in American military strategy and tactics. Not surprisingly, the daring and secretive nature of these commando operations has generated a great deal of interest. The American public has an overwhelmingly favorable view of the forces, and nations around the world recognize them as the most capable fighting units: the tip of the American spear, so to speak. But how much do we know about them? What are their origins? What function do they fill in the larger military structure? Who can become a member? What do trainees have to go through? What sort of missions do Special Forces perform, and what are they expected to accomplish? Despite their importance, much of what they do remains a mystery because their operations are clandestine and the sources elusive. In The US Special Forces: What Everyone Needs to Know, eminent scholar John Prados brings his deep expertise to the subject and provides a pithy primer on the various components of America’s special forces. The US military has long employed Special Forces in some form or another, but it was in the Cold War when they assumed their present form, and in Vietnam where they achieved critical mass. Interestingly, the Special Forces suffered a rapid decline in numbers after that conflict despite the fact that the United States had already identified terrorism as a growing security threat. The revival of Special Forces began under the Reagan administration. After 9/11 they experienced explosive growth, and are now integral to all US military missions. Prados traces how this happened and examines the various roles the Special Forces now play. They have taken over many functions of the regular military, a trend that Prados does not expect will end any time soon. This will be a definitive primer on the elite units in the most powerful military the world has ever known.