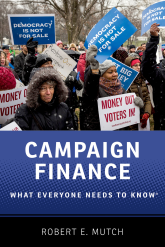 Campaign Finance: What Everyone Needs to Know®

The one percent has been providing an ever larger share of campaign funds since the 1980s. Well over half of the money contributed to the presidential race in 2015 came from only about 350 families. One-fourth of it came from just seventy-eight donors, all of whom made contributions of $1 million or more. Can we still say we live in a democracy if a few hundred rich families provide such disproportionate shares of campaign funds? Congress and the courts are divided on that question, with conservatives saying yes and liberals saying no. The debate is about the most fundamental of political questions: how we define democracy, and how we want our democracy to work. The debate may ultimately be about political theory, but in practice it is conducted in terms of laws, regulations, and court decisions about PACs, super PACs, 527s, 501(c)(4)s, dark money, the Federal Election Commission, and even the IRS. This book explains how those laws, regulations, and court decisions fit into the larger debate about how we want our democracy to work.