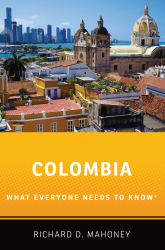 Colombia: What Everyone Needs to Know®

Even to experts, Colombia is one of the most confusing countries in the Americas. Its democratic tradition is among the richest and most long-standing in the hemisphere, with only eleven years of military rule during its 200 some years of independence. Except for the United States and Canada, Colombia has had the highest growth rate in the Americas over the last 75 years. It is widely seen as having some of the continent's best universities and deep intellectual traditions along with a dazzling array of fine and industrial arts and now globally-popular tropical music. But despite these admirable achievements, Colombia has also experienced what its Nobel laureate Gabriel García Marquez once called “a biblical holocaust” of human savagery. Along with the scourge of politically-motivated assassinations (averaging 30 per day in the 1990s) have been drug-related massacres, widespread disappearances, rapes and kidnappings, and even the signature defilement of murder victims. The relentless dynamics of the illegal drug industry raises a puzzling question: how did Colombia capture and control that enormously-lucrative industry and then leverage its status as America's No. 1 drug supplier into a $7 billion military partnership with the world's superpower? The answer to that question is something everyone needs to know. To unravel the enigma, Richard D. Mahoney links historical legacies with key periods in the post-World War II era and then sets forth overarching cultural features--land violence, the Church, race, the Spanish language, and magical culture-that run through Colombia’s history, distinguish its national experience, and fuel its unquenchable creativity.