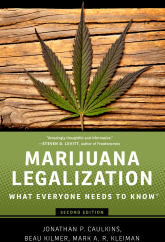 Marijuana Legalization: What Everyone Needs to Know® (2 ed.)