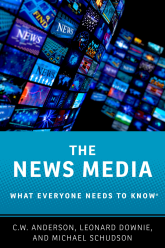 The News Media: What Everyone Needs to Know®

The business of journalism has an extensive, storied, and often romanticized history. Newspaper reporting has long shaped the way that we see the world, played key roles in exposing scandals, and has even been alleged to influence international policy. The past several years have seen the newspaper industry in a state of crisis, with Twitter and Facebook ushering in the rise of citizen journalism and a deprofessionalization of the industry, plummeting readership and revenue, and municipal and regional papers shuttering or being absorbed into corporate behemoths. Now billionaires, most with no journalism experience but lots of power and strong views, are stepping in to purchase newspapers, both large and small. This addition to the What Everyone Needs to Know® series looks at the past, present and future of journalism, considering how the development of the industry has shaped the present and how we can expect the future to roll out. It addresses a wide range of questions, from whether objectivity was only a conceit of late twentieth century reporting, largely behind us now; how digital technology has disrupted journalism; whether newspapers are already dead to the role of non-profit journalism; the meaning of “transparency” in reporting; the way that private interests and governments have created their own advocacy journalism; whether social media is changing journalism; the new social rules of old media outlets; how franchised media is addressing the problem of disappearing local papers; and the rise of citizen journalism and hacker journalism. It will even look at the ways in which new technologies potentially threaten to replace journalists.